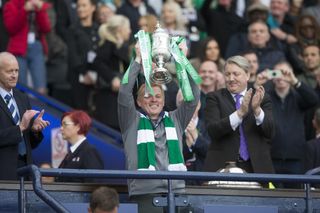 The Hoops beat Hearts 2-1 to complete the domestic treble, and in doing so wrapped up a ‘triple treble’ having won nine trophies on the bounce.

Celtic said on their Twitter feed: “We are delighted to announce that Neil Lennon has been offered the job as permanent Celtic FC manager and the details will be confirmed in the coming days.”

📝 We are delighted to announce that Neil Lennon has been offered the job as permanent #CelticFC manager and the details will be confirmed in the coming days 🍀⚪️ #TrebleTreblepic.twitter.com/riIbbdkB7I— Celtic Football Club (@CelticFC) May 25, 2019

Lennon said in his post-match press conference: “There is a good chance I will accept the job.

“It’s probably one of the best days of my life. You will never see it again. They are immortal now.”

The Northern Irishman returned to the club he previously led to three titles, having left Hibernian in January.

Odsonne Edouard was the hero as Celtic completed the treble by sinking Hearts at Hampden Park.

Hearts went ahead early in the second half through Ryan Edwards but Hoops striker Edouard levelled with a penalty just after the hour mark before firing a dramatic winner with eight minutes remaining.

Celtic chief executive Peter Lawwell said on the Hoops’ Twitter account: “Neil stepped up to the plate when we needed him. He’s a true Celtic man who knows the club and the city.

“He’s a winner with a fantastic eye for a player. I’m delighted to announce he’s been offered the job.”