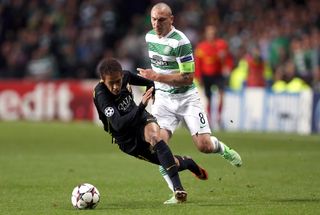 Brown was dismissed during Barca's 1-0 win at Celtic Park earlier this month when he kicked out at Neymar as the Brazilian skidded along the floor after the duo had tangled.

UEFA have handed the 28-year-old midfielder an additional two-match suspension on top of the automatic one-game ban for his conduct in the Group H game, but the Scottish champions deemed that "excessive" in a statement confirming plans to appeal.

Meanwhile, a Mikael Lustig ankle injury could force Celtic manager Neil Lennon to rethink his formation ahead of the trip to Hibernian on Saturday.

With the right-back having picked up the knock on international duty with Sweden, the Northern Irishman is contemplating a reshuffle of his pack in the absence of an obvious replacement.

"We'll have to rethink a little bit regarding Hibs," he told the club's official website. "It will be a gamble if Lustig was to make it so it might not be a gamble worth taking.

"[Efe] Ambrose has played international football at right-back so he's a possibility. We have Darnell Fisher too, but I might also change the formation. I'll have a look over it in the next couple of days.

"We have been flexible over the last few years with how we've played. We've gone 4-4-2, played a diamond, played a back three, 4-2-3-1. I like players who can adapt to different positions and formations.

"We've had plenty of flexibility where individuals are concerned and certainly within the squad.

"Whether we change the formation is not a major issue for me because the players can adapt to it."

Celtic are three points clear at the top of the Scottish Premiership with a game in hand over second-placed Inverness Caledonian Thistle.