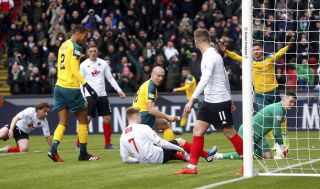 Celtic took another step towards further William Hill Scottish Cup glory with a 3-0 win over Clyde on Sunday, but skipper Scott Brown is not looking beyond Wednesday’s Ladbrokes Premiership clash with Hearts.

After Olivier Ntcham fired the Hoops ahead in their fifth-round tie against League One side Clyde at Broadwood, veteran midfielder Brown scored just before half-time to give the holders a comfortable interval lead.

Substitute Vakoun Bayo added a third in the final minute to make it 33 successive domestic cup tie wins in a row and set up a quarter-final clash with St Johnstone at McDiarmid Park.

Celtic are looking to win the tournament for an unprecedented fourth successive time, but Brown is already focusing on the visit of Hearts, as the champions bid to maintain their seven-point lead over Rangers at the top of the table.

He said: “We have a huge game against Hearts at Celtic Park and hopefully we can get three points there and keep kicking on, game by game.

“We don’t look too far ahead and I know we have St Johnstone in the next round of the cup, but we will deal with that when it comes up.

“We have to keep going and it is now about Hearts.

“They are a good team, they press high up the park and they will cause us problems, but we can cause them problems.”

Brown praised fellow midfielder Ntcham for his contribution to the side this season after it looked like his Hoops future was in doubt last summer, with reports stating he wanted to leave.

He said: “He’s very confident on the ball, willing to take the ball in any situation and chips in with goals as well.

“If you look at his finish, it was incredible, but he also has that drive and his link-up play with Odsonne Edouard, Leigh Griffiths and Callum McGregor recently has been phenomenal.

“He loves it here, he is enjoying his football and everyone appreciates that.”