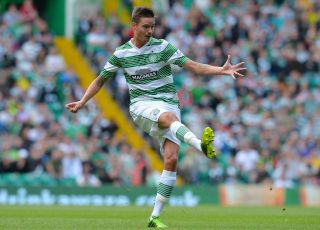 The Sweden international has featured 26 times for the club in all competitions this season but is expected to return to action in March or April.

Manager Neil Lennon confirmed the news on Friday while revealing that the 27-year-old had been forced to play through the pain before going under the knife this week.

"Lustig had surgery, (and will be out for) four months," Lennon said. "He had both hips done, so the procedure was a bit more in-depth than first thought.

"We are hoping he will be back March/April time but he had a lot of work done which makes his recent performances even more remarkable.

"His movement was restricted and he was in a lot of pain after games so it needed doing. So hopefully he will come back an even better player which will be brilliant for us."

Lennon also confirmed there had been no developments on Joe Ledley's new contract, although the 42-year-old is keen to keep him and team-mate Georgios Samaras at the club.

"We have spoken to Joe already on the situation but heard nothing back," he added.

"The contracts are up in the summer and they are two players we don't want to go, but we can't force them to stay. We have had no indication either way of what players want to do."