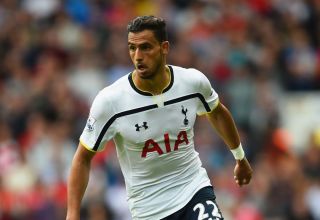 The Belgium international was brought to White Hart Lane by former Spurs boss Andre Villas-Boas from Twente ahead of the 2013-14 campaign.

Chadli initially struggled to adapt to the demands of English football and he was restricted to 15 Premier League starts in his debut campaign, leading to suggestions that Chadli's stint in north London would be a brief one.

The 25-year-old revealed there were offers available had he sought an exit, but he instead chose to stay and fight for his place.

That decision has been vindicated as he has started the campaign in fine form under the stewardship of Mauricio Pochettino, scoring four goals in six top-flight matches.

"There were some interesting offers this summer, but I wanted to stay at Spurs. I wanted to fight for my place because I know I have a lot of beautiful things to show," Chadli told reporters.

"I'm a warrior. Someone who wants to fight for his chance. In the beginning it wasn't easy for me. I was one of the players Pochettino hadn't invited for an individual meeting. So I didn't really know what to expect.

"But I've reacted by working hard during the week. I grabbed my chance during a [UEFA] Europa League game in Cyprus, where I came in 20 minutes before the end of the game.

"The next game, against QPR, I scored twice and since then I'd always play."