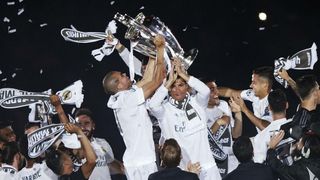 Cristiano Ronaldo, who scored the winning penalty in Milan, and his fellow Galacticos have to wait until Wednesday to start the defence of their title.

However, the likes of Barcelona, Bayern Munich, Manchester City and Atleti start their bid for supremacy when the group stages get underway on Tuesday.

Using Opta data, we take a look at the best stats ahead of Tuesday's eight group-stage matches.

- PSG and Arsenal's only previous encounter was in the 1993-94 Cup Winners Cup semi-finals. The Gunners won 2-1 on aggregate, including a 1-1 draw at the Parc des Princes.
- PSG have lost only one of their last 39 home games in European competition (W25 D13), and that was against Barcelona in April 2015 (1-3).
- Arsenal are unbeaten in their 12 away games against French clubs in European competition (W8 D4), including winning their last seven.
- However, only once (in seven games) has an English club beaten Paris SG at the Parc des Princes in European competition. It was Jose Mourinho's Chelsea in September 2004 (3-0).
- Arsenal have qualified for the Champions League for the 19th consecutive season, only Real Madrid (20) can boast a longer current streak.