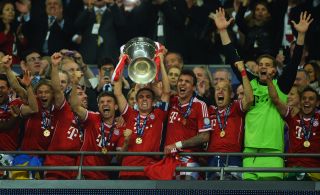 The Premier League side - who have reached the group stages of the competition for the last 16 seasons - were placed in a difficult Group F at the draw in Monaco.

Arsene Wenger's men will face a tough challenge to get out of the group, with Dortmund - last season's beaten finalists - and Napoli sure to present a serious test.

While that looks the toughest group, all four teams in Group H have lifted the trophy previously, with Barcelona joined by seven-time winners Milan, Ajax and Celtic.

Barcelona and Ajax have both won the competition on four occasions, while Celtic were crowned European champions in 1967.

Amazingly, Barca and Ajax have played each other six times in the last three years in the Champions League, with two meetings coming in the group stage and two in the round of 16, over two legs.

The other two matches were both legs of the 2011-12 quarter-final. Barcelona have won three of the fixtures, including both two-legged knockout ties.

Real Madrid manager Carlo Ancelotti will return to former club Juventus in Group B, while they will also face Turkey's Galatasaray and Denmark's FC Copenhagen.

The 2014 Champions League final will take place in Lisbon on May 24.

Full list of UEFA Champions League groups for the 2013-14 season:

NEWSKlopp: Dortmund have a score to settle with Arsenal in Champions League