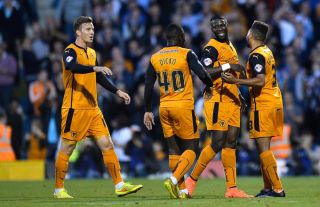 Felix Magath's men had already suffered defeats to Ipswich Town and Millwall in their opening two fixtures and Bakary Sako's solitary strike was enough to make it a hat-trick of losses for the recently relegated side.

Wolves - promoted as League One champions at the end of last season - enjoyed the better of the opening period and duly led at the break when Sako completed a corner routine that had clearly been worked on at the training ground.

Fulham did improve after the break, but their woe could have been deepened had Sako not missed a late penalty.

The visitors made a bright start and Dave Edwards fired an early warning when he broke down the right and flashed an effort across Jesse Joronen and wide of goal.

Wolves' early pressure was then rewarded after 15 minutes.

A well-worked corner from the right saw Edwards dummy the ball and Sako kept his composure to drill home a first-time shot.

Fulham introduced teenage striker Moussa Dembele at half-time and the 18-year-old was involved early in the second half, driving at the Wolves defence and forcing Carl Ikeme into a low save to his right.

The hosts then saw close-season signing Ross McCormack, who had been largely anonymous, strike narrowly over the bar when the ball fell kindly for him on the edge of the area just after the hour mark.

Despite their improvement, Fulham could have gone two behind in injury time when Nouha Dicko was hauled down by Cameron Burgess, but Sako's resulting penalty was saved by Joronen low to his left.

Fulham are now off the foot of the table on goal difference alone, while Wolves produced an immediate response following Saturday's loss at Rotherham United.