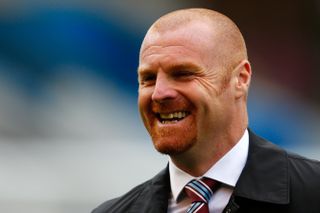 Sean Dyche's side are riding on the crest of a wave after stretching their unbeaten league run to 11 games by beating fellow promotion-contenders Derby County 2-0 last Saturday.

Four wins in their last five Championship matches have ensured the Turf Moor club have strengthened their grip on second place behind leaders Leicester City - who are eight points clear at the top.

Dyche's charges will fancy their chances of securing their first win over neighbours Blackburn since 1979 - coincidentally a barren spell of 11 derby clashes without a victory over the Ewood Park outfit.

Blackburn's hopes of mounting a charge for the play-offs suffered a setback when they were hammered 4-0 in another derby at Bolton Wanderers last weekend, having avoided defeat in their previous five Championship games.

If Burnley can rise to their latest challenge, then they will not only claim the local bragging rights, but also take another step towards a return to the Premier League.

Leicester are not in action this weekend due to scheduled opponents Wigan Athletic's involvement in the FA Cup, so Burnley can cut the gap on the leaders to five points, but a win for Rovers will enhance Derby's chances of gaining automatic promotion.

Steve McClaren's men host struggling Millwall on Saturday, when they will be eyeing a fifth consecutive home win to put their Turf Moor misery behind them.

Leading scorer Chris Martin misses out due to a one-match ban following his red card at Burnley, so Conor Sammon could make a rare start.

Nottingham Forest's promotion push has hit the buffers and boss Billy Davies starts a five-match ban when the Midlands club travel to bottom-of-the-table Barnsley on Saturday.

Davies was punished by the Football Association on Tuesday as a result of his conduct towards referee Anthony Taylor at half-time during the 2-2 draw with Leicester to add to his misery after watching Forest slump to a second consecutive defeat by Wigan last weekend.

Relegation-threatened Yeovil Town could climb out of the relegation zone with a win over Sheffield Wednesday, while Doncaster Rovers - another struggling side - host Yorkshire rivals Huddersfield Town.