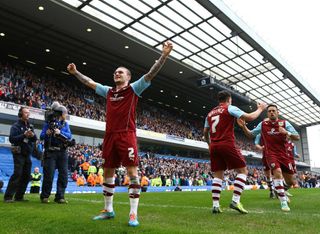 A win on Saturday, combined with Derby failing to claim maximum points at home to Huddersfield Town, will see Burnley climb back to the top flight for the first time since relegation in 2010.

That will be no easy task against a Middlesbrough side that has won three matches in succession, while Derby look firm favourites to get the better of Huddersfield, whose winless run of eight matches has seen them drop to 17th in the table.

Just below Burnley, the race for the play-offs continues to heat up, with Tuesday seeing three of the contenders falling to defeat, while the trio of sides immediately outside the play-off spots all won.

One of those sides was Eddie Howe's Bournemouth, with the 3-1 victory over Reading their fifth in succession, and they will feel confident of extending that run when they visit rock-bottom Yeovil Town.

Level on 61 points with Bournemouth are Brighton and Hove Albion and Ipswich Town, with the former hosting struggling Charlton Athletic on Saturday while Ipswich welcome Doncaster Rovers to Portman Road.

Reading's sixth-placed position is looking increasingly precarious with just a two-point cushion to the chasing pack, and they may have dropped out of the play-off spots by the time they host already-promoted leaders Leicester City on Monday.

Elsewhere in the top six, Wigan Athletic are out of action due to their FA Cup semi-final with Arsenal, while QPR will bid to bring to an end their stuttering form when they host Nottingham Forest.

At the wrong end of the table, Charlton's trip to Brighton is the first of two crucial matches in four days for Jose Riga's men, who welcome fellow strugglers Barnsley on Tuesday.

Barnsley, currently second from bottom and five points adrift of Charlton in 21st place, visit Bolton Wanderers on Saturday hoping for a boost in their survival bid.

The other side in the bottom three, Millwall, take on London neighbours Watford, looking to build on back-to-back wins that have given boss Ian Holloway a big boost after a difficult start to his tenure.

Elsewhere, two woefully out of form clubs - Leeds United and Blackpool - meet at Elland Road, with the latter nervously looking over their shoulder at the bottom three, while Blackburn Rovers will hope to give their slim play-off hopes a lift when they travel to Sheffield Wednesday.