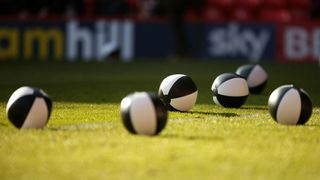 An Aitor Karanka-less Middlesbrough side saw their Championship title hopes suffer another blow as they lost 2-0 at lowly Charlton Athletic.

Karanka was not present at The Valley following a furious meeting with Boro's players after their defeat to Rotherham United in midweek, with assistant Steve Agnew taking the reins on Sunday.

More off-pitch drama ensued in south-east London as the match was delayed by more than three minutes immediately after kick-off, with home fans protesting against owner Roland Duchatelet by throwing beachballs onto the pitch.

Once play resumed, chances were at a premium at both ends until Charlton took the lead shortly before the hour mark through a powerful Jorge Teixeira header.

Unsurprisingly, second-placed Boro responded and applied the pressure on the Charlton's goal, before a poor error from Dael Fry allowed Callum Harriott to seal the points with 10 minutes remaining.