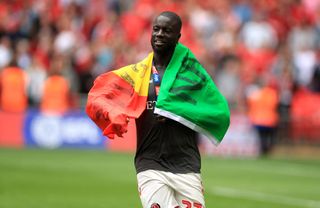 Charlton re-established their Sky Bet Championship promotion credentials with an emphatic 3-0 victory over Derby at The Valley.

The international break was clearly a welcome interruption for Lee Bowyer’s side after their early-season optimism had been tempered by a run of just one win in five games.

Charlton’s first-half dominance was almost embarrassing, so disjointed were the visitors.

The Rams offered just a single effort on goal and that was a powder-puff shot from former Charlton loanee Krystian Bielik which was collected with ease by home goalkeeper Dillon Phillips.

By contrast, Charlton poured forward at every opportunity and served up a display that was infused with verve and imagination.

The width created by overlapping wing-backs Chris Solly and Jake Forster-Caskey occupied the Derby full-backs and left room inside for the excellent Jonny Williams-Macauley Bonne axis.

The pair created chances for each other throughout the opening half-hour before Williams was forced to limp off through injury.

They first combined in the sixth minute when Williams slipped the ball into Bonne’s path and a sweet rising shot left Derby keeper Kelle Roos grasping at thin air.

Their movement and understanding of each other was impressive given that Bonne only made his first Charlton start in late September.

Williams was inches away from sliding home Bonne’s 20th-minute cross-shot before the midfielder fed the overlapping Bonne only for Roos to tip away his angled shot.

Roos spread himself at the feet of Josh Cullen and prevented Charlton from taking a 2-0 lead as half-time approached.

The visiting keeper could do nothing three minutes into the second half when his defenders left Naby Sarr unmarked to head home a Cullen corner.

Still Derby offered little at the other end and Conor Gallagher wrapped up the points for the Addicks when he shifted the ball onto his right foot and curled a delightful shot into the top corner from 20 yards.

Derby substitute Mason Bennett did at least force Phillips into a save five minutes from time but that would have offered scant consolation for Derby’s 2,999 travelling supporters.