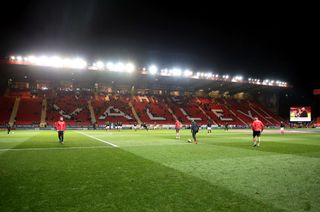 Charlton’s owners have reinforced their commitment to the club and insisted that promised investment will come in April.

East Street Investment, who took over the Championship outfit in January, are locked in a boardroom battle with Matt Southall and Jonathan Heller, who were stood down as directors by majority shareholder Tahnoon Nimer 10 days ago.

Southall was vocally critical of the owners for not producing the funds he promised when they took over, but Nimer has said the money is imminent.

The owners said in a statement on their official website: “This is a difficult time, the COVID-19 crisis has changed the world for everybody.

“For Charlton fans, there has been uncertainty around the future of the club with a lot in the press and posted on social media.

“We must begin by reiterating that our commitment is to Charlton Athletic. The club is not for sale and the majority shareholder, His Excellency Tahnoon Nimer, is not looking for a buyer.

“These are tough times for any professional football club and we are 100 per cent focussed on seeing Charlton through this difficult period. This will require investment and the first instalment of that investment will come in April.”

Southall and Heller were replaced on the board by Claudiu Florica and Marian Mihail, who are under taking the EFL’s fit and proper test.

The statement added: “The club has submitted documents for EFL approval to demonstrate the source and sufficiency of funds.

“The club has also submitted documentation for the new directors, Claudiu Florica and Marian Mihail, for the Owners’ and Directors’ Test.

“The EFL remain supportive and have informed us what remains outstanding.

“The club will remain in contact with the EFL with the aim of providing the necessary information as required by the League as soon as possible, so we can successfully conclude matters.

“We will get everything sorted and football will return but, until then, we wish all Charlton players, staff, fans and their families the very best in these trying times.”