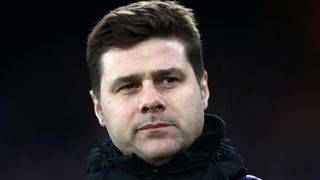 Mauricio Pochettino insists he will not be cheering on Arsenal when Tottenham's bitter rivals travel to Manchester City on Sunday.

Pep Guardiola's men will regain that position if they are able to beat the Gunners at the Etihad Stadium and close to within two points of leaders Liverpool, who are four better off than Spurs ahead of facing West Ham on Monday.

Asked after the 1-0 triumph over Newcastle whether he would watch City v Arsenal unfold, Pochettino replied: "Yes, at home."

Pushed to clarify whether he might be shouting for Tottenham's north London neighbours, the Argentine coach was in playful mood.

"No! Why? Never!" he said, before suggesting he hopes football will be the winner.

City lost to Newcastle in midweek, while Liverpool were held to a home draw against Leicester City.

29 - Tottenham have gone 29 games without a draw in the Premier League, a new record, beating Bolton’s previous best of 28 set in 2011. Cabinet. pic.twitter.com/PpEmLQxNv4— OptaJoe (@OptaJoe) February 2, 2019

Spurs took the opportunity to restate their title credentials, which have arguably slipped under the radar of late on the back of EFL and FA Cup exits and another quiet transfer window.

"We don't need to be in some position like today to convince ourselves about our capacity, our potential or possibility to win," Pochettino added.

"Today, we are there because we deserve to be there. We will see what happens in the future."