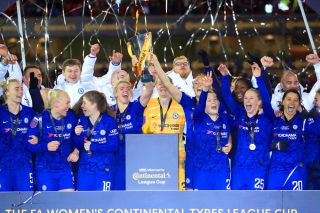 Chelsea boss Emma Hayes hailed Bethany England as “a credit to herself and her family” after her two goals helped secure the Blues their first Women’s Continental League Cup.

The England international striker opened the scoring at Nottingham Forest’s City Ground with a close-range finish in the eighth minute, and then poached the winner in added time for her 21st goal of the season after Leah Williamson had equalised in the 85th minute.

Recognising the achievements of the 25-year-old, Hayes said: “There’s nothing more joyful than when a player, when you don’t really know if they are going to be able to cut it at the top level, gets their head down and puts everything into their career.

“The talent was always there, but now you are starting to see the fruit of hard work and perseverance. I really think I’ve got a player that can add something going to the next stage.

“She’s a credit to herself and her family.”

It was Hayes’ sixth trophy in her eight years in charge, and she could complete a domestic treble this season with Chelsea in the last eight of the Women’s FA Cup and unbeaten in second place of the Women’s Super League.

The delight for Hayes was winning silverware at the home of one of her footballing idols – Brian Clough.

“I could sense it when I came into the building. The players haven’t got a clue who he is, and I’m busy taking photographs of myself with his photographs on the wall.

“My sister sent me lists of quotes this morning, with my favourite being this one – ‘I wouldn’t say I was the best manager in the business, but I was in the top one’.

The Gunners dominated the game from virtually start to finish but were thwarted by an inspired goalkeeping performance from Chelsea’s Ann-Katrin Berger, who pulled off a number of superb saves.

Arsenal boss Joe Montemurro was naturally gutted by the defeat.

“We were in control, and moments of madness have hurt us,” said Montemurro. “We have to be smarter, better in those situations.”

Asked to quantify those ‘moments of madness’, Montemurro added: “We didn’t deal with a cross for the first goal, and the last goal, it was just a matter of managing the situation and we didn’t do that. They sneaked behind us and scored.

“The difference today was that they had three chances and they scored two goals, and we scored one. We created opportunities and unfortunately they scored the ones they created, and we didn’t score ours.”

Arsenal are still in the hunt for three trophies of their own, with the WSL, FA Cup and Champions League.

Montemurro said: “This team will be fighting, this team does not give up.”