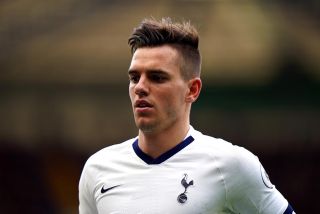 Alonso toasted his first league match since the 2-0 win at Spurs on December 22 with a virtuoso performance, drilling a fine finish, blazing just over with a smart 20-yard volley and striking the bar with a whipped free-kick.

Olivier Giroud blasted home after Ross Barkley struck the post at Stamford Bridge, to set Chelsea en route to a first league double over their local rivals in 14 years.

The main talking point, though, came when Spurs midfielder Giovani Lo Celso somehow escaped a red card – and any censure – after a VAR check, despite stamping on Chelsea captain Cesar Azpilicueta.

According to BT Sport, Stockley Park later admitted the decision was wrong and Antonio Rudiger’s own goal teed up a fraught finish, but Chelsea held out for a first win in five Premier League matches.

The fourth-placed Blues opened up a four-point buffer on Spurs with the victory, to add to their December win over Tottenham in north London.

Frank Lampard got the better of his former Blues boss Jose Mourinho for the second time in three months – with even the Spurs manager’s pre-match mind games falling flat in west London.

Ex-Chelsea manager Mourinho had claimed an inside source had leaked him the Blues’ line-up, and his prediction was proven right when Lampard’s side switched to three at the back.

Chelsea had caught Tottenham cold with a surprise move to 3-5-2 in the win at Spurs in December, and Mourinho had clearly tried to fake Lampard out of repeating that feat.

Lampard resisted any temptations to be swayed by Mourinho’s pre-match chat however, reprising that tactical reshuffle – and again reaping full reward.

Stamford Bridge chief Lampard had challenged Chelsea to take control of the race for fourth place ahead of this London derby grudge match, and the Blues finally delivered after weeks of nervy performances and patchy results.

Giroud broke the deadlock after a cagey opening, capping a threatening attack for the Blues at the third time of asking.

The France striker beat the offside trap from Jorginho’s through ball and hit the target. Hugo Lloris could only palm into the middle of the box, and the onrushing Ross Barkley thumped an ugly effort against the right post.

Giroud was in no mood to waste another rebound however, latching onto the loose ball with a fine steadying touch, before firing past Lloris at the near post.

The goal stood after the inevitable VAR check to make sure Giroud was onside in the first place, leaving Lampard to celebrate with no little trace of sarcasm.

Chelsea saw two goals chalked off by VAR in Monday’s 2-0 home loss to Manchester United, and on finally staying on technology’s good side Lampard was unable to resist a narked, over-exuberant toasting of the decision.

Alonso thumped a fine 20-yard volley just over the bar as Chelsea continued to press, before the hosts rode out some concerted Spurs pressure.

Davinson Sanchez missed a prod at a squirming ball across the face of goal, Azpilicueta produced a fine block from Lucas Moura’s shot and Japhet Tanganga’s loose control wasted a potential one-on-one.

Alonso capped a smart team move with an even better strike after the break, Giroud flicking on to Mason Mount who in turn fed Barkley to flick through for the onrushing wing-back.

Lo Celso then somehow escaped a red card despite a nasty stamp on Azpilicueta, with Chelsea again the frustrated party after a VAR review.

The Blues again had the right to feel aggrieved at the decision however, especially in light of United captain Harry Maguire avoiding censure despite kicking Michy Batshuayi in the groin at Stamford Bridge on Monday.

Mount skinned Jan Vertonghen to lay on a fine chance for replacement Tammy Abraham, who could not quite poke past Lloris.

Lamela profited from a deflection off the luckless Rudiger to cut Spurs’ arrears at the death, but Chelsea held on for a fully merited victory.