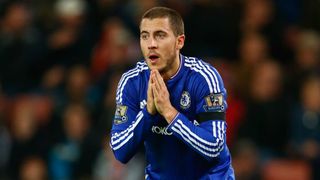 The Belgium international, who is yet to score in the league this season, has been out of action since Chelsea's win over Crystal Palace on January 3 due to a groin injury.

While he is not available for Saturday's match at home to Everton, manager Hiddink will assess Hazard next week with the game at Arsenal in mind.

Speaking at his pre-Everton media conference, the Dutchman said: "There were no injuries in the last game. The only one not available yet is Eden Hazard, although he is on the pitch working.

"I hope and think in the upcoming week he will have full training sessions and then we will decide if he can join us in the Arsenal game next weekend.

"What I said before was we have to be a little bit careful not to fall again with a setback, so that is why I say he must have some tough, intense training sessions Tuesday to Thursday before he plays - he must have that.

"[Radamel] Falcao is out, we knew that, but the rest are okay."

Hiddink was unconcerned that Real Madrid could launch a bid to sign Hazard after they were given a two-window transfer ban by FIFA which - if it survives their appeal - puts them in a race against time to attain key targets.

"All big clubs are looking to big players but I don't expect to see much of this in this window," he added..

"I am not sure, I think they have both [Madrid and Atletico] protested and I don't know whether they cannot use this transfer window or the summer and if it will be postponed or not."