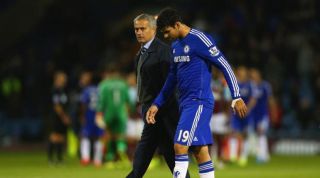 The Spain striker missed Saturday's 2-1 win at Crystal Palace in the Premier League and a hamstring injury has ruled him out of the Group G clash against the Slovenian champions at Stamford Bridge.

Costa has been outstanding since joining the London club from Atletico Madrid, scoring nine goals in seven top-flight matches despite not being fully fit.

"It’s the same problem that he [Costa] is having. Now an injury, not almost an injury. He's not training because he's not in condition to do it." he said.

The Premier League leaders face Manchester United on Sunday, but Mourinho ruled out resting players with one eye on the trip to Old Trafford.

He said: "I don't have Man United in mind, I have Maribor in mind."

Mourinho's in-form side have won their last five games in all competitions, but the former Real Madrid coach is not taking Maribor lightly.

"Maribor's results tell you a lot. Their results away from home have been very impressive. We have full respect for them." he said.