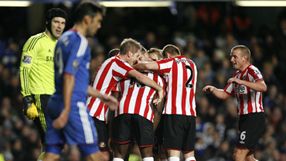 Arsenal climbed to second with a 2-1 win at Everton before Sunderland produced an inspired display at the home of the champions to complete one of the upsets of the season.

Stunning goals from Nedum Onuoha and Asamoah Gyan put Sunderland 2-0 ahead by the 52nd minute and a rare mistake by England full-back Ashley Cole allowed Danny Welbeck to complete the rout just before the end.

Onuoha's goal, the first by an opposition player in the league at Chelsea this season, came just before half-time following a mazy dribble Lionel Messi would have been proud of which left three Chelsea defenders trailing in his wake.

Chelsea remained top of the table but that was about the only crumb of comfort they could take from an afternoon when they were outclassed by a team they beat 7-2 in the corresponding fixture last season.

Their lead at the top was cut from three to two points by Arsenal's win at Everton. Manchester United, who drew 2-2 at Aston Villa on Saturday, are a point behind Arsenal in third on 25 points.

Sunderland moved up from ninth to sixth with their first away win of the season which came just two weeks after they were humiliated 5-1 by their arch-rivals Newcastle United.

It was their first victory over Chelsea after 11 successive defeats by the Londoners since 2001.

"Two weeks ago we were hung, drawn and quartered (by Newcastle) and we wanted a response," Sunderland manager Steve Bruce said.

"We're looking at how well we played and we thoroughly deserved to win today. Chelsea are a great team, but all-round I'm delighted for the boys because they worked hard to get over the Newcastle performance.

"Two weeks ago was the worst, today... well, I'm not going to come to Chelsea and win 3-0 very often. We'll enjoy a few glasses tonight and take it easy."

Chelsea had won their opening six home league games of the season and outscored their opponents 17-0.

Since they last lost at home in the league in February, they had won 11 straight games with a 44-2 goal tally and their last home defeat by a three-goal margin was in 2002 when Manchester United beat them 3-0.

"We were not able to come back into the game after going behind and it was a bad day.

"We were not able to play our football for 90 min