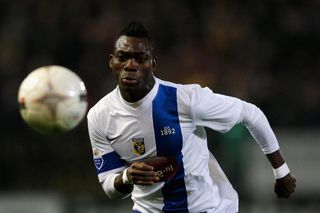 The 22-year-old moved to Stamford Bridge in September last year from Porto before joining Eredivisie side Vitesse on loan.

Atsu, a Ghana international, has featured 27 times for Vitesse in all competitions this term and is in with a chance of making Kwesi Appiah's national squad for the FIFA World Cup.

Chelsea team-mates Lucas Piazon, Patrick van Aanholt and Bertrand Traore are also on loan at the GelreDome and Atsu would welcome another temporary move to continue his development.

He told Voetbal International: "It all depends on Chelsea. If they say that I have to stay in London, then why not?

"Here, I get the chance to develop myself and at Vitesse we play an attacking system.

"Suppose I move to a bigger club and am placed on the bench or I move to a team that plays counter-attacking football, that would leave me feeling like I am going to the office and taking a nap on my desk."

Atsu was voted player of the year by Vitesse fans this season as he helped keep the club in with a shout of a UEFA Europa League place going into the final week of the season.