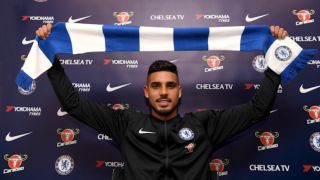 Emerson Palmieri believes Italian connections at Chelsea will enable him to adapt swiftly after joining the Premier League club from Roma.

The Brazil-born defender - who has declared international allegiance to Italy although he is uncapped - completed his Stamford Bridge switch on Tuesday.

Emerson reunites with former Roma defender Antonio Rudiger following his move to Chelsea, while Davide Zappacosta is another Italian at the club.

With Antonio Conte in charge there is a strong Italian flavour at Chelsea and Emerson thinks this will help him to settle in to life in England.

"It is my first time here," Emerson said. "From the little I've seen of the city it is really pretty. People have always spoken very highly to me of London. As for the club, it is absolutely sensational, one of the best clubs in the world so these are really happy times for me.

"Toni [Rudiger] and I played for a couple of years together at Roma and they were great years. All I can say about him is that he is an extraordinary guy and a great player, and he has already shown that here at Chelsea, so I could not be happier to be back alongside him.

"I had already spoken with him twice last week and today as well. When I arrived here in London, he was the first person I sent a message to say that I was in the house.

"I learned so much in Italy. Before I went there I used to be a player who just dribbled and shot at goal but what I saw there was that the tactical game can really help your performance. So now I am a better player and I think in some way that is because I managed to combine the two games, Italian and Brazilian.

"Now I am definitely going to improve here at Chelsea under Antonio Conte. He is someone who has already shown that he is a great coach and everyone who plays with him improves, so I am coming to Chelsea with this perspective, that I am going to be playing with one of the best coaches in the world and I am going to get better."

‘I came here because it’s a great team with a great history. Today I am realising one of my dreams to pull on the shirt of such a great club.' January 30, 2018

Emerson received his first Italy call-up at the end of last season, only to have to pull out of the squad after suffering an anterior cruciate ligament injury on the last day of the Serie A season, but the 23-year-old is ready to move on from his previous fitness problems at Chelsea.

"Physically I feel great," Emerson added. "The injury is now in the past, they were six difficult months for me but what is important is right now I feel good.

"I couldn't feel better so I only have in mind the idea of training with my team and helping us to achieve more."