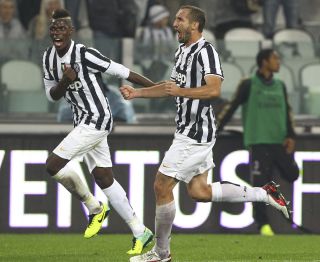 The France international has been in superb form for the Serie A champions this season, with the Turin outfit starting the campaign undefeated.

But Chiellini suggested that the 20-year-old would already have departed the Juventus Stadium if the club were looking to sell.

"As far as Pogba is concerned, Juventus has already proved this summer that they didn't want to sell him," he said.

"This means they have a huge budget and don't know how to spend it and sometimes they even pay a player more than they wanted to.

"Therefore Pogba could be one of the most suitable players, but Juventus clearly said he wouldn't leave the team and he didn't leave."

However, Chiellini also admitted Pogba could depart further down the line if Juventus received an attractive offer.

He added: "As regards the future, you can't promise a player that he will remain in a team forever.

"In today's football world, and especially in Italy, everybody has got a price and if a club receives such an offer, then a player will leave the team.

"I believe this episode is a non-problem, it is something normal. Instead of Pogba, there could have been any other player."