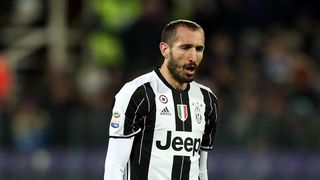 Giorgio Chiellini is expecting Juventus to face a similar challenge against Lazio in the Coppa Italia final to the one posed by Monaco in the Champions League.

Juve expertly negotiated their way through a tricky semi-final tie against Monaco, who are on the cusp of winning the Ligue 1 title, coming through 4-1 on aggregate.

Teenage superstar Kylian Mbappe was Monaco's main dangerman on that occasion and centre-back Chiellini says Juve will face similar problems against the pace of Balde Keita and Felipe Anderson when they look for a third consecutive Coppa Italia title.

"No one is thinking about the treble. Our focus is entirely on winning this final and lifting our first piece of silverware this season," Chiellini told a media conference.

"We are fortunate to be here for the third year in a row and we want to return to Turin on the back of the same result.

"Lazio bear a few similarities to Monaco in that they have players with pace who enjoy getting in behind. The likes of Keita and Felipe Anderson, although very different attackers, try to get at you and take you places you do not want to go just like Kylian Mbappe for example.

"We are talking about a side that play quickly and precisely through the lines while remaining solid in defence and credit for that must go to Simone Inzaghi and his players to following his plans through to the letter.

"Finals are won or lost in the big moments and we need to make sure that we are the ones who make the most of them Wednesday night."