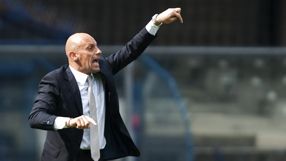 After winning their opening game of the season, Chievo have lost five in a row and were hammered 4-1 by previously winless Palermo on Sunday.

Di Carlo had been in charge since June last year in his second stint at the club, having coached them for two seasons between 2008 and 2010.

In between, he was also in charge of Sampdoria, where he was fired after nine months.

"The club would like to thank the 'Mister', not only for the excellent results in his three seasons with Chievo but also for his effort, professionalism and dedication," said Chievo in a statement.

Corini captained Chievo during the 1990s but has never coached a Serie A side before. His previous coaching jobs were at Portosummaga, Crotone and Frosinone in the lower divisions.

Palermo's Giuseppe Sannino was the other coach to lose his job this season when he was fired after only three games.