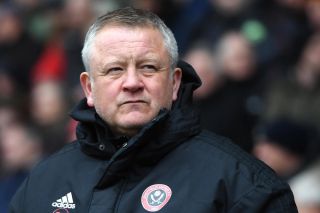 Sheffield United boss Chris Wilder was disappointed with the way his team reacted to going a goal in front after they were pegged back late on in a 1-1 draw against Millwall.

John Egan was sent off for a handball on the line and while Ben Marshall missed the resulting penalty, Millwall found an equaliser through Jake Cooper’s diving header deep in stoppage time.

Wilder said: “They’re tough opposition to play against and they obviously set themselves up at the start to play on the counter-attack. It was difficult for us to get the initiative with everyone behind the ball.

“After the goal they deserved a point, but we never showed enough ambition to go on and score the second, which is uncharacteristic from our team.

“They missed a penalty, but we didn’t just deserve a point. We have deserved more in other games like today, but that is how football is.

“We played safe and didn’t go for the jugular. We played backwards and square and sat in, so I’m not surprised they got back into the game and deservedly so.

“They had a drive to get back into the game and that’s one of their characteristics. It’s stinging that we didn’t get those extra two points.”

Millwall boss Neil Harris showed huge appreciation for his team’s spirit to come from behind and secure a hard-earned point.

Harris said: “I’m delighted with a point and I think we deserved it. Huge credit to Sheffield United and Chris Wilder for where they are at the moment.

“It’s the first time I played a back five as a manager and I did so to combat how good Sheffield United are. We wanted to try and stay in the game for as long as possible to fight their strengths.

“Whatever you do it’s difficult to stop them. I was disappointed with the goal that we conceded but delighted with the character and belief we showed to get back into the game.

“I thought the penalty would be a turning point. We missed it, but we were in the ascendancy. I can’t fault the players, they were outstanding today. To come to Bramall Lane at this stage of the season and come from behind is a great effort.

“What we might lack as a club we won’t be let down by desire or spirit within the group. The boys didn’t stop and that’s the great thing. We kept going until the end, we always think there will be another chance.

“It’s just another point gained from us. We have a game in hand which will be vital for us, but any point earned at this stage of the season is hard earned whether you’re at the top or the bottom of the league.”