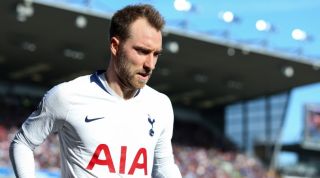 The Denmark international is in the final year of his contract with the Premier League club and appears to have no intention of extending.

With the player making no secret of his desire to join Real Madrid, and Spurs at risk of losing him on a free transfer next summer, a January sale could suit both parties.

AS has reported that the chances of a transfer going ahead will depend on the form of Zinedine Zidane’s side by mid-season, and whether there are injury issues within his squad.

Eriksen is considered as an option to strengthen the Merengues ranks despite not being a target for the club over the summer.

Manchester United’s Paul Pogba was considered the number one option for Zidane over the summer, but a move failed to materialise.

The relatively low cost of bringing in the Tottenham star, as well as his affordable salary demands, mean a January move is quite possible.

The outlet’s sources claim that Spurs have offered Eriksen a new four-year contract worth €6 million per season, but the 27-year-old isn’t convinced.

Such an extension would raise his annual earnings by €2m per year, putting him on the same scale as Hugo Lloris and Dele Alli and only behind Harry Kane, who brings in €8.8m per year.

Madrid are said to be willing to match Spurs’ offer of a package worth €6m annually.

That would put him on similar terms to the likes of Casemiro, Raphael Varane and Dani Carvajal, but some way behind top earners Gareth Bale (€14.5m net), Sergio Ramos (€14m), Luka Modric and Toni Kroos (both around €11m).

The next question would be over a transfer fee, as Spurs made demands of €70m for his signature last summer.

That price tag is likely to significantly drop by January, given that Eriksen will be free to open talks to join a new club for free next summer.

ANALYSIS Forget the defence for a minute: England's midfield is the real concern right now

OPTIONS Who can solve Gareth Southgate's centre-back problems for England?