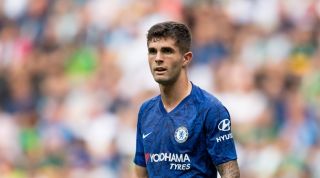 Christian Pulisic's old youth coach has revealed that the forward did not want to join Manchester United because his father "couldn't stand" Jose Mourinho.

Robin Walker coached Pulisic, who was born in the United States but spent part of his childhood in England, at Brackley Town.

Walker, a Chelsea fan, advised Pulisic to move to Stamford Bridge when he fell out of favour at Borussia Dortmund last term.

And the winger's former mentor claims that Pulisic's father ruled out a move to United when Mourinho was still in charge.

"When I was in Dortmund last year, I told him that he had to come [to Chelsea]," Walker told the Daily Telegraph.

"He wouldn’t go to Manchester United because of Jose Mourinho. His father couldn’t stand Mourinho, because he didn’t promote young players.

"It was at that point I asked: ‘What about London? That’s where it’s at.’ I was trying to sell the city.

"His agent agreed, saying: ‘When you make these decisions, it’s all about investment and property.’ I was delighted that he did sign.”

Pulisic is expected to make his first Premier League start when Chelsea take on Leicester on Sunday.