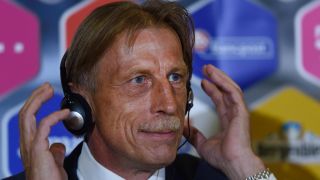 Christoph Daum has been appointed the new coach of Romania on a two-year deal, it was announced on Thursday.

Daum assumes the vacant role left by Anghel Iordanescu after Romania were eliminated in the group stages of Euro 2016.

Romania finished bottom of Group A after losing to hosts France and Albania, while they played out a 1-1 draw with Switzerland.

"I am happy to be here," said 62-year-old Daum. "It is an honour and responsibility for me to give my best for the Romanian national team.

"In order to achieve success we need to show a united front. Team work and belief are important. Let's stick together when times are tough."

Daum is an experienced manager at club level, guiding Stuttgart, Fenerbahce, Besiktas and Austria Wien to their respective league titles.

The German also won the Bundesliga as a player in 1977-78 for Cologne, where he spent the latter stages of his career.

Romania are looking to qualify for a first World Cup since 1998, where they lost out to eventual semi-finalists Croatia in the round of 16.