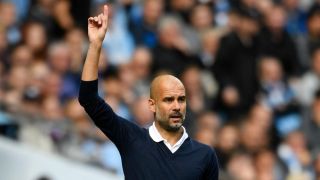 Pep Guardiola says Manchester City are beginning to remind him of his great Barcelona side after a dominant week domestically and abroad.

City demolished 10-man Liverpool 5-0 last Saturday and followed that up with a first away win in main-draw European action under the Catalan by thumping Feyenoord 4-0.

Guardiola won LaLiga three times and the Champions League twice in a glittering four years as coach at Camp Nou, while putting together a side revered as one of club football's finest.

With a well-slicked City attack featuring Sergio Aguero and Gabriel Jesus supported by the likes of Kevin De Bruyne, David Silva and Bernardo Silva, Guardiola believes he could be on the brink of another era-defining run, with a Premier League trip to Watford on Saturday their next examination.

Asked if City's vintage reminded him of his great Barca side, he replied: "Of course, what we have done against Feyenoord is what I liked and tried to do at Barcelona and Bayern Munich.

"But sometimes I wasn't able to do it, even at Barcelona and in Munich, to keep the ball high and press. To control the counter-attacks and be there and after they have three passes, we have the ball.

"That is always the target and why I came here. But that is a process and with City, I feel now, they have good players that become a big team.

"[Saturday], for example, is a big test for us. The big clubs win the games and that is the big difference to the big teams.

"In this situation, the teams I left at Barcelona, Bayern Munich, and the other big teams, like [Real] Madrid, and Juventus of Turin, in this kind of situation, a game every three days, they are there, they make a professional performance, score a goal in the right moment and win the game. That is the process we have to discover.

"When we are able to do that, then I will feel we have made a step forward to become a better team.

"Of course, when you have time to prepare, you can compete everywhere. Last season, we could compete in the games against the top six, but we were not able to win. That is the gap we have to achieve this season."

Guardiola suggested the biggest barrier between City and greatness is mental strength, but the recent ruthlessness they have showed is a pleasing factor.

"I think every player believes, but sometimes in a bad situation or moment we were not able to overcome the situation," he said.

"You have to do that. You have to have a strong mentality so when you see the players they have the personality to play on the big stages.

"That is what I want to feel. Of course, we can lose, but from the beginning against Liverpool and Feyenoord, from the first minute, we showed the supporters, that we wanted to play and win this game. That's what I want to see."