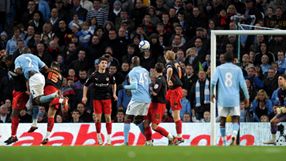 City reached the last four for the first time in 30 years after scoring the only goal of a dour match when England defender Micah Richards powerfully headed home a corner after 74 minutes.

Stoke City ended an even longer wait to make the semis for the first time since 1972 when they beat West Ham United 2-1 at the Britannia Stadium.

They will face Bolton Wanderers, who beat Birmingham City 3-2 on Saturday when United made sure of their place with a 2-0 win over Arsenal.

City were made to battle all the way by second division Reading who beat Premier League West Bromwich Albion and Everton on the way to the last eight.

They defended superbly against Roberto Mancini's expensively assembled team who were largely unimpressive apart from the hard-working David Silva.

Mancini, under pressure to end City's 35-year wait for a trophy, said his team looked sluggish after travelling to Ukraine for a Europa League game on Thursday which they lost 2-0 to Dynamo Kiev.

"But today at least we had 17 attempts on goal against two or three for them, but it was difficult because Reading are a good team and played well."

The rivalry between United and City has intensified since Sheikh Mansour of Abu Dhabi took control at Eastlands and began pouring hundreds of millions into the club.

Despite their neighbours' cash-fuelled arrival among England's elite, United are still the dominant force, beating City in an epic League Cup semi-final last season and losing only one of their last eight matches against them over the last three seasons.

Asked about facing United, Mancini replied: "It should be a fantastic game and we are very happy to be at Wembley, but it is only the semi-final. We want to go back for the final as well."

Manchester City have not met Manchester United in the FA Cup semi-finals since 1926 when City won 3-0 before losing 1-0 to Bolton in the final.

Stoke, who have been competing in the FA Cup for 128 years and have never reached the final, went ahead with a trademark goal after 12 minutes when Robert Huth rose above the West Ham defence to powerfully head home a long thrown from Rory Delap.

Frederic Piquionne equalised for the Hammers with a controversial goal as he appeared to control the ball with his arm in the build-up.

Former West Ham winger Matthew Etherington had a 47th minute penalty saved after he was adjudged to have been tripped by Scott Parker, before Danny Higginbotham smashed a 63rd free-kick through the West Ham wall for what proved to be the winner.