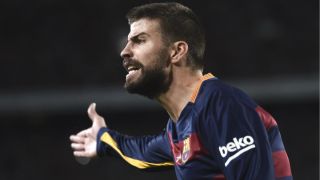 Former Espanyol coach Javier Clemente has hit out at Gerard Pique, claiming the outspoken Barcelona defender acts like a hooligan.

Espanyol targeted Pique after the Spain international mocked the club's supporters for not being able to fill their stadium following Barca's 4-1 first-leg win at Camp Nou.

Speaking about Pique's actions, Clemente - who now coaches Libya after enjoying three spells in charge of Espanyol - told Radio 4G: "Pique sometimes comes across like a fan or a hooligan.

"He's a Barcelona hooligan and doesn't realise that he's a very important player for both Barcelona and Spain.