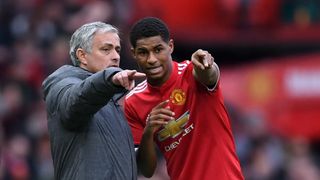 Rashford converted his first opportunity, cutting inside of Trent Alexander-Arnold and arrowing a brilliant effort across goal and inside the far post to end a 10-game barren run in the Premier League.

The 20-year-old completed his first top-flight double since his debut in February 2016 when he appeared in the right place at the right time to guide a loose ball beyond Loris Karius after Liverpool were caught out by a long pass for the second time.

They were United's only two shots on target in the entire match and Mourinho believes Rashford's brace – which came in front of England manager Gareth Southgate – will be a huge boost to his self-belief.

"He scored two goals in a big match against a top-class opponent," Mourinho told a post-match news conference after United moved five points clear of Liverpool.

"The good thing was he scored from the first chance he had, because the last few months that was not happening with him and he was feeling that a little bit in terms of his confidence.

"But today a big game, probably unexpectedly, we trusted him, we felt the game could be adapted to his quality. He is improving a lot in training and sometimes that's the point.

"You are not in the training ground, you don't see what's going on, the self-confidence, the moods, and the feeling with him was that he was improving in the last few weeks."

Rashford was replaced by Marouane Fellaini in the 70th minute as Mourinho added an extra body to the midfield, prompting boos from a large number of supporters.

The manager was not worried about that response, but was unhappy with the jeers for Scott McTominay after he passed the ball backwards during a second-half counter-attack.

Mourinho said: "The fans can do what they want. I am not upset at all with that reaction, I am upset with a reaction they had to Scott McTominay. A kid of 20 years old was making all the right decisions and they want him to make the wrong decisions.

"So, when the kid decides to break the intensity of the game, not to lose, keep possession, play a back pass and give a solution to keep the ball in the opponent's half. It was a wonderful solution that many, many top players with experience don't do it.

"The kid did it and the fans reacted against the kid, that for me was the bad one."

68' - Here comes our first change of the afternoon! rightly receives a standing ovation as he makes way for , who is on for his 150th appearance for . March 10, 2018

Nevertheless, the United boss was overjoyed with the final result, though he admitted the display could have been better.

"Perfect result yes," Mourinho said. "Three points is very important. I wouldn't go so far as saying it was a perfect performance.

"In the first half the game gave us the opportunity to be direct, fast and score goals, more than we did. A third goal from [Juan] Mata would've been fantastic."