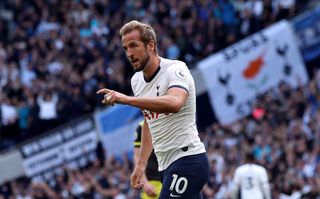 Clive Allen has a firm grip on his place in Tottenham’s history books, but admits Harry Kane is making him nervous about losing it.

Allen bagged a club-record 49 goals in just 54 matches during the 1986/87 season for Spurs, an achievement that is yet to be topped.

Kane looks the likeliest to break that and has already gone close when he plundered 41 goals in 2017/18 and Allen reckons the England captain, who has scored seven goals in 10 games so far this season, will be the only man to take the record off him.

“He has gone close. The way he has improved himself since coming in as a 16-year-old has been phenomenal,” Allen told the PA news agency.

“He has always had that ability to score goals and he has improved his all-round game.

“If anyone can do it, Harry can and if he does I will be the first one to shake his hand.

“I would like to maintain that record, and it will be an incredible feat if anyone does it, so good luck to him. He has already threatened to do it a couple of times.”

Allen scored 33 times in the league, with three hat-tricks, while also firing David Pleat’s side to the FA Cup final and League Cup semi-final.

He opens up about that phenomenal season in his autobiography ‘Up Front’ and reveals how excelling at Spurs was his destiny.

“I was born two weeks after they did the double and my dad (Les Allen) was in that side,” he added.

“It was always my destiny to one day play for Tottenham, which obviously happened.

“I had the best years of my career there.

“It has been such a big part of my life, listening to my dad talk about the double, right the way through to the last day at White Hart Lane, it has had a big impact.

Really excited for the launch of my new book, ‘Up Front’. Many thanks to @JamesOlley and @deCoubertin for bringing my journey in football to life. It’s out on Oct 17th… not to be missed ⚽️📖 https://t.co/vhBreGsS4f— Clive Allen (@Clive_Allen9) September 29, 2019

“You dream about breaking the record and hope that something like that could happen, but I never imagined it would.”

Allen, who was famously sold by Arsenal 63 days after they paid £1.25million for him, can take a small piece of credit for helping cement Spurs’ position among the elite of English football.

He was part of the coaching set-up between 2004 and 2013, working under Martin Jol, Juande Ramos and Harry Redknapp, as the north Londoners established themselves as Premier League top six regulars.

“The club has moved forward in a massive way,” Allen said. “Having been involved in it to a small degree, having a part in it. It is nice to know that I played sort of a part.”

That progression led them to the Champions League final last season, but they have endured a tough start to the current campaign.

A horror 10 days, where they were knocked out of the Carabao Cup by League Two Colchester, hammered 7-2 by Bayern Munich and humbled 3-0 at Brighton, has led to uncertainty over the position of boss Mauricio Pochettino.

There have been calls to sack the Argentinian, but Allen, who knows chairman Daniel Levy well, knows that is not going to happen.

“I don’t think he will get sacked, when you look at the way he has worked and the way he has developed the squad in terms of Champions League qualification, being competitive at the top end of the Premier League,” Allen said.

“Daniel has delivered in a big way in terms of everything that is in place now, the best stadium in the world and the training complex, his relationship with the manager is a good one.

“That has shown, Mauricio has been there five years and I don’t see that changing any time soon.”

:: Up Front by Clive Allen with James Olley is published on 17 October by deCoubertin Books and available from all good bookshops. To order a signed copy please visit deCoubertin.co.uk/cliveallen