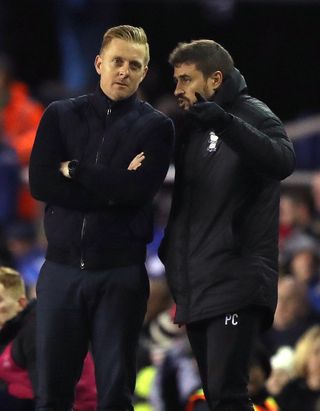 Birmingham head coach Pep Clotet claims to have cleared the air with Sheffield Wednesday manager Garry Monk after the 3-3 draw between the teams at St  Andrew’s.

The pair appeared to bury the hatchet when Monk embraced his former long-term assistant before the game.

They also shared a lengthy, animated conversation afterwards but Clotet did not appear for his post-match press conference until 6pm, just after Monk had left the area.

Three months ago, Monk refused to shake his former long-term assistant’s hand before the 1-1 draw at Hillsborough.

Asked what was said, Clotet said: “Not much really. We have not spoken for a long time. We could have talked about the weather!

“It was good to clear the air. He spoke his mind and I spoke my mind. The air was always clear from my point of view.

“Hopefully we can now turn the page on this story. I have worked with some of the best managers in football such as (Manuel) Pellegrini, (Mauricio) Pochettino and (Michael) Laudrup and I do not hold grudges with anyone.

“It’s so easy to get lost in grudges and regrets that you forget to enjoy it and keep friendships going forward.

“I treat him as a colleague and always deal with people with a lot of humility.

“I offered him my hand and it’s always nice to talk about the game.

“We should not be wasting a minute talking about us but we should instead focus on the game and the players.”

Monk admitted he shook hands with Clotet to ‘be a man’.

He said: “Apparently I’m not a man if I don’t do that, so I decided to be a man.

“I didn’t want it to be a distraction and something as trivial as that to be made into a story or a headline, which a lot of people want to do.

Wednesday’s winless run stretched to six games while they have only won one of their last 11 Sky Bet Championship games.

But after trailing twice, they were only denied victory by Scott Hogan’s added-time equaliser after a spirited second-half performance.

“There was fight, passion, desire, the competing side of it was right up there with what we saw before the period we’ve been in.

“We had to fight back from adversity, an own goal, and we came through all those things and showed the character to come back.

“We were very unlucky not to win. Overall we would have deserved it.”

Blues took the lead with a Jacob Murphy own goal after six minutes only for Barry Bannan to level 14 minutes later with a 22-yard drive.

Lukas Jutkiewicz’s drive from the edge of the box restored Blues’ lead but Fernando Forestieri made it 2-2 with a penalty in the 34th minute.

Murphy appeared to win it with a scorching angled shot in the 65th minute but Hogan grabbed the equaliser in the first minute of time added on.

Clotet was delighted with his strikers, adding: “It’s a lovely partnership – one has what the other lacks.

“We can play one way to Scott and another way to Jukey.”