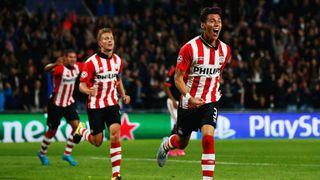 Luke Shaw has received a visit from PSV coach Phillip Cocu and defender Hector Moreno as he continues his recovery from a broken leg in Eindhoven.

Moreno's challenge led to a double fracture for Shaw during Manchester United's 2-1 Champions League defeat on Tuesday, prompting the Mexico international to issue an immediate apology via social media.

With the England international still recovering in hospital following surgery, Cocu was keen to offer his support to the former Southampton star and says the visit will also help Moreno move on from the incident.

"We asked if Luke was open for a visit and we showed our support. Luckily his biggest pain was over," Cocu told NOS on Friday.

"We offered him help and asked if there was anything we could do. For Moreno it was also very good. All this really made an impact on him."

Shaw is expected to be out until 2016 as a result of the injury.

The 20-year-old is reportedly set to undergo a second routine procedure as the initial repair work to his lower right leg is completed.