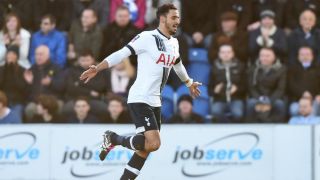 The home side, rock-bottom of League One, lost two players to injury early on after a heavy collision between team-mates and struggled to settle in a first half dominated by Spurs.

Chadli's fine finish gave Mauricio Pochettino's side the lead they deserved and both Erik Lamela and captain Harry Kane should have made the advantage more comfortable by half-time.

Colchester sharpened up after the break, but the killer blow came in the 64th minute when Eric Dier's ambitious effort took a huge deflection before nestling in the far corner.

A header from Chadli made it 3-0 and, though Ben Davies scored an own goal just two minutes later, Tom Carroll struck soon afterwards to ensure the visitors a spot in the fifth round for the first time since 2012.

Colchester were dealt an early blow when Alex Wynter was taken off on a stretcher following a clash of heads with team-mate Tom Eastman, who required stitches for a nasty cut and was substituted a few minutes after returning to the pitch.

Spurs promptly took control of the game after the delay, with Christian Eriksen testing Jake Kean from close range before Erik Lamela clipped the base of the far post with a fine curling effort from 25 yards.

Eriksen rifled just over the crossbar from 20 yards at the end of a fast Spurs break, but the visitors got the breakthrough a minute later from an almost identical position. Lamela prodded the ball to Chadli and the Belgian made the most of time and space to fire right-footed into the far corner.

Spurs should have made it 2-0 before the break when Davies picked out Kane unmarked just six yards out, but his header was straight at Kean, who did well to turn the ball past the post.

Colchester looked far more settled early in the second half and Nabil Bentaleb almost turned a Darren Ambrose shot into his own net, though Chadli should have doubled the lead when he crashed an effort off the crossbar from just six yards after turning into space following Kane's cut-back.

But another stroke of misfortune broke the resilience of the home side and handed Spurs a crucial second goal. Dier was allowed to stride unchallenged into the Colchester half and his hopeful strike from 30 yards looped off Matthew Briggs before bouncing into the far corner past the despairing dive of Kean.

Marvin Sordell spurned a great chance to halve the deficit when played clean through on goal, but he could only find the outside of the upright with just Michel Vorm to beat, and that miss proved costly as Chadli turned home Davies' cross with a delicate header at the near post.

Davies bundled into his own net from after Gavin Massey's shot came flying back off the post, but Carroll calmed any Spurs nerves with a neat finish after ghosting into the six-yard box to meet Chadli's low cross.