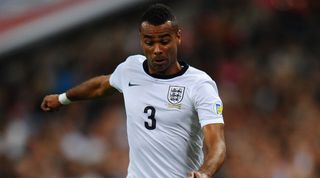 The Chelsea defender also sat out Friday's 4-1 win over Montenegro due to the problem, and will be unavailable for the visit of Waldemar Fornalik's side after failing to recover in time.

Leighton Baines - who filled in for Cole against Montenegro - will expected to continue in his stead and claim his 21st England cap.

Cole is joined on the sidelines by Tottenham right-back Kyle Walker, who is unavailable due to suspension.

Manchester United duo Phil Jones and Chris Smalling are in contention to replace Walker, as England look to ensure their place at next year's World Cup finals in Brazil.

Roy Hodgson's men will secure qualification with three points against Poland, who have already been eliminated following Friday's 1-0 loss to Ukraine.

England are one point ahead of Ukraine - who meet winless San Marino in their final game - heading into the encounter, but know that a failure to take maximum points will likely see them face a play-off to qualify.