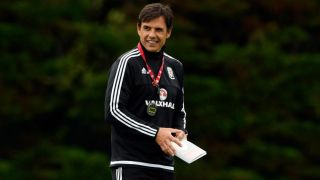 Chris Coleman is unconcerned about any possible gamesmanship from Portugal in their Euro 2016 semi-final and praised a newly streetwise edge to his Wales side.

Coleman's men produced a stunning performance to upset Belgium 3-1 and book a place in the final four at their first major tournament since the 1958 World Cup.

By contrast, Portugal are through to the semi-final of a European Championship for the fourth time in their last five attempts, but Coleman does not believe the likes of Cristiano Ronaldo, Nani and Pepe will find any naivety to prey upon within his squad.

"You call it gamesmanship, but sometimes it's being streetwise at this level," he said. "We've got better at that. We used to be far too honest.

"I'd look at what players used to do to us, and us in the same situations, and we'd be miles behind. Sometimes it's not pretty, it's even ugly, and you can see it as negative.

"But anything you need to do to stay in the game, do it. It's streetwise, smart football. We've got a lot better at that in the last few years.”

Coleman must to without Aaron Ramsey and Ben Davies due to suspension at the Stade de Lyon.

Arsenal midfielder Ramsey has been particularly influential during the campaign but his manager is confident the replacements for each player - tipped to be Jonny Williams and Jazz Richards respectively - can step up.

"You'll be faced with that sooner or later, with suspension or injury," he said. "That's why it's about the squad or the team. Aaron Ramsey's performances in this tournament have been incredible.

"He's definitely one of the best players in the tournament, and that's not me being biased. Ben Davies, a young defender playing slightly out of position, has grown in stature and has been fantastic.

"But the boys who come in, I have no worries about them whatsoever. They know the drill, their jobs and what's required. They just need the same attitude as anyone else. Go and enjoy it, get on the pitch. Let's see how they fare. I have every confidence in them."

The shrewd tactical approach behind Wales' run in France has won Coleman plenty of plaudits, to the extent that a journalist in his pre-match briefing jokingly asked if he would consider taking Belgium's rebuilding job.

It is a far cry from his spell in charge of Greek second-tier outfit Larissa between May 2011 and January 2012 - a period the 46-year-old believes was the making of him.

"I was out of work for a year," said the former Fulham and Coventry City boss. "My next job, four years after managing in the Premier League, was managing in the Second Division in Greece on the advice of Alex Ferguson. He'd told me to take whatever came up, so I did.

"What I didn't realise when I went there was I would be working for nothing because we never got paid. That was another experience. I worked with great people at Larissa, the players were different class in their mentality. It was one of the best experiences. I'd do it again, definitely."