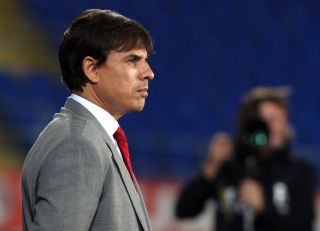 Simon Church's 67th-minute goal proved to be the difference for Wales as they picked up just their third win in Group A at the Cardiff City Stadium.

Coleman was forced to contend with a lengthy injury list prior to the clash, following fitness concerns for the likes of Gareth Bale and captain Ashley Williams, but he still felt that defeat would have seen him lose his job.

"Had we lost this game, I would have been out the door, no doubt," he said.

"It's a win and, for me as a manager, looking at our squad of players and all the pull-outs we had, I am delighted.

"I wanted us to look after the performance and we did that. We may have ridden our luck a bit but I thought we deserved to win.

"I enjoyed the win more than any other because there has been a lot said and we were up against it. The players stood up to the test."

Next up for Wales is a trip to Brussels on Tuesday, where they face a formidable Belgium side who have dropped just two points in qualifying.

Marc Wilmots' men booked their place in Brazil with a 2-1 win over Croatia on Friday and Coleman is under no illusions as to the task his side face.

"I've ordered 23 tin hats for next Tuesday, it's going to be hard," he added.

"I think they're the most expensive international squad on the planet, but it'll be a great experience for us.

"It's going to be difficult in Belgium but we've got to be brave and go there and play our own stuff and if we come back from there with something it'll be magnificent."