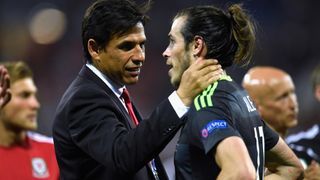 Wales manager Chris Coleman believes there is more to come from his team after bowing out of Euro 2016 in the semi-finals.

Goals from Cristiano Ronaldo and Nani saw Portugal to a 2-0 victory over Wales in Lyon on Wednesday.

Coleman's men led Wales to their first major tournament since 1958, before defying expectations to reach the last four in France.

"It's always been that - qualifying regularly. There was a psychological barrier we needed to go through for the first one, given it had been so long," Coleman said.

"Now, the one thing that will stop us from doing it again is ourselves. We're good enough.

"We have to be hungry, we have to have the same hunger and desire, and we'll give the World Cup campaign a hell of a crack."

Coleman was proud of Wales' run, but also the way they performed – having claimed wins over Belgium, Northern Ireland, Russia and Slovakia.

He said: "It's a great experience, this tournament. It's been completely different to what we expected, a different challenge.

"You can't predict it unless you've already been through it for six or seven weeks: we faced all sorts of challenges as a squad and as a group, and we've come through them all up to this one.

"We know what we're good at. We won't change what got us here in the first place.

"We have to go into the next campaign with the same hunger and desire as we've had in the last two or three years. That's what I've told them.

"I'm prouder of this team than any team I've been involved in because I know what they've sacrificed to get to this stage. They couldn't give any more.

"I'm sure they'll go back to Cardiff to a nice welcome, and they deserve that."