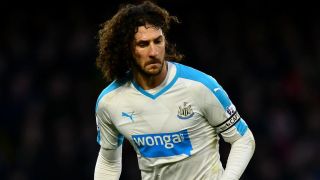 Newcastle United captain Fabricio Coloccini concedes his side are "too nice" as they continue to fight for Premier League survival.

The Tyneside club sit third last in the league and are embroiled in a relegation fight this season, and Coloccini wants to see more aggression from his team-mates.

"Maybe we are too nice," the 34-year-old said. "It is true that we need to win more tackles.

"If you look at all the 50-50s at the moment, maybe we are losing more than the opposite side and that is not good enough.

"Sometimes, in our team, that can make the difference. We have great football players with the ball, but we need the ball. And to get the ball, we need to be winning that tackle."

Newcastle suffered a 2-1 defeat to Watford on Saturday and Coloccini was left to rue their missed chances.

"It feels like it’s the same story again, really," the Argentine said. "We had a lot of chances, but we couldn’t score.

"We had our instructions, and I thought we did fairly well in the first half.

"But we conceded right at the start of the second half, and then it’s always hard to score and get back in the game after that, especially when you’re playing away.

"We haven’t been playing that badly, but when we’ve been on top of games, we’ve not really taken advantage of that.

"I thought we played really well for the first 15 minutes, but then I think they dominated the first half after that.

"We created a lot of chances, and played quite well in the transition, but we couldn’t score.

"We are missing chances, and conceding too many chances to the teams we are playing against. That is something we have to do better.

He added: "It’s one step forward and then one step back at the moment. We played well against Manchester United and West Ham, and there were moments in this game where we played well too.

"But we still got punished for our mistakes and we have to improve. It’s important that we start keeping a clean sheet."

Newcastle's next task in the league is an away clash against Everton.