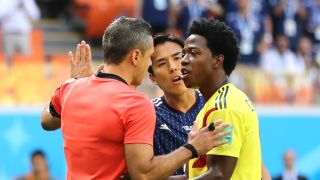 The midfielder was sent off after two minutes and 56 seconds in Saransk, having been deemed to have deliberately handled Shinji Kagawa's 20-yard drive with his arm.

But Sanchez's dismissal was not the earliest in World Cup history: that record still belongs to Jose Alberto Batista, who was given his marching orders just 54 seconds into Uruguay's final group match against Scotland at Mexico 1986.