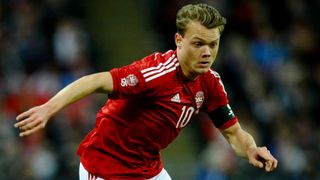 The winger, 24, has played the last three seasons with OB in the Danish Superliga after starting his career with Lyngby Boldklub. He has been capped at multiple youth levels by Denmark and has earned seven senior caps for his country.

“Emil is a young, dynamic midfielder with a bright future and he comes to this club with valuable experience in the Danish Superliga and with his national team. He’s a player that we feel will fit in well in our system and will provide our attack with an added dimension,” Sporting director and head coach Gregg Berhalter said in a statement on the franchise’s official website. “We have a solid corps of midfielders and Emil is an important addition to that group.”

The MLS runners-up have not been overly busy thus far in the offseason, Larsen joining defender Corey Ashe as the only acquisitions in the transfer market to this point.

The Crew open their season Mar. 6 against the Portland Timbers, in a rematch of the MLS Cup.