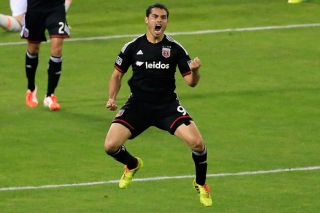 Fabian Espindola scored a brace for DC as they edged to a 2-1 win at Jamaica's Waterhouse, who remain top of Group Four.

But while Waterhouse have played all four of their group matches, DC still need to face Tauro twice.

It leaves Ben Olsen's men well-placed to reach the quarter-finals, thanks to Espindola.

His 38th-minute opener was all class as he beat three markers before chipping a delightful effort over a hapless Richard McCallum.

Espindola doubled the lead five minutes into the second half, heading in a Samuel Inkoom cross from the right.

Taylor Kemp saw red for DC in the 69th minute and Hughan Gray gave the hosts hope with a fine 20-yard free-kick.

But Waterhouse were unable to find an equaliser as United clinched a key win.

In Group Five, the Timbers enjoyed a 4-2 win against Hondurans Olimpia.

Maximiliano Urruti opened the scoring for Portland in the 11th minute before Kevin Alvarez headed the visitors level at Providence Park.

Will Johnson's speculative 25-yard effort just before the half-hour mark saw the Timbers go ahead again as Olimpia goalkeeper Noel Valladares palmed the ball into his own net.

A goalkeeping howler at the other end helped Olimpia level as Andrew Weber spilled a cross for Romell Quioto to score the easiest of goals.

But Urruti's second goal and a Rauwshan McKenzie header after the break saw the Timbers to their win.