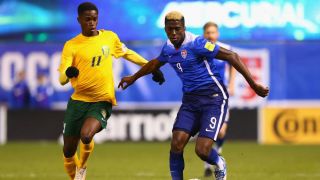 The United States thrashed St Vincent and the Grenadines 6-1 in CONCACAF World Cup qualifying after being given an early scare on Friday.

The minnows took a shock fifth-minute lead through Oalex Anderson, but that was as good as it got for the visitors at the Busch Stadium.

Bobby Wood, Fabian Johnson and Jozy Altidore had Jurgen Klinsmann's men ahead before half-time, as Geoff Cameron, Gyasi Zardes and Altidore – again – completed a dominant performance as USA made the ideal start in Group C.

Mexico, meanwhile, began their campaign with a routine 3-0 victory over El Salvador at the Estadio Azteca.

Andres Guardado opened the scoring after seven minutes with a perfectly executed free-kick before Hector Herrera doubled the hosts' advantage moments before the interval.

Carlos Vela wrapped up all three points on the hour-mark as he collected Jesus Corona's slipped pass to chip in his 15th international goal.

Elsewhere, Canada held on to seal a 1-0 win over Honduras in Vancouver and Jamaica were beaten 2-0 at home to Panama.

Trinidad and Tobago secured a 2-1 victory away to Guatemala and Costa Rica squeezed past Haiti 1-0.