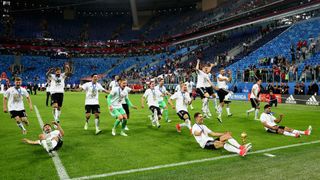 Lars Stindl scored the only goal as Germany prevailed in a thrilling Confederations Cup final against Chile.

It capped a superb couple of weeks in Russia for Joachim Low and his so-called "B team", with the likes of Stindl, Leon Goretzka, Timo Werner and stand-in captain Julian Draxler shining as more established stars were given a pass for the competition.

Unsurprisingly, Germany players dominate our team of the tournament, while the defeated finalists are well represented and there is a place for a certain Portuguese superstar.

Bravo missed the first two matches as he recuperated from a calf injury but more than made up for lost time with a redemption story in the semi-final, saving all three Portugal penalties to send Chile through. Acquitted himself tidily against Germany and won FIFA Golden Glove.

A prodigious talent with maturity beyond his years, Bayern Munich's Kimmich is a cap centurion in waiting. He was deployed at full-back, wing-back and on the right-hand side of a back three by Low during the tournament and never looked out of place.

While others in the Germany squad face an anxious 12 months, Low will surely look no further than Kimmich and Hector in the wide defensive roles for Russia 2018. The Cologne man revelled in being given licence to provide attacking width for Die Mannschaft as Julian Draxler roved in field and he performed his defensive duties immaculately.

On the basis of sheer unquestionable tenacity, Medel has a strong claim to being part of the beating heart of an admirable Chile team alongside Arturo Vidal and Alexis Sanchez. Like so many in Juan Antonio Pizzi's side, the tough-tackling 29-year-old seemingly finds an extra gear when in national colours.

The veteran former Porto defender appeared to be taking steps towards retirement when he joined Rangers before the tournament but the Scottish Premier League side will have some player on their hands if Alves can retain this imperious form. In his 300 minutes on the field in Russia, Portugal did not concede a goal.

Much of the focus was on the youthful element in Low's squad but Stindl, an accomplished 28-year-old Bundesliga performer who appeared to have missed the boat in terms of international football, providers a real feel-good tale. Performing with the composure of a 50-cap star, he helped himself to three goals, including the winner in the final.

The breakout star of the competition, Goretzka was certainly unfortunate to lose out to Draxler in the FIFA Golden Ball stakes. It is easy to see why Bayern Munich covert the 22-year-old, whose athleticism, technical prowess and clinical finishing – his second and third of the tournament against Mexico served as a masterclass in midfield goalscoring – mark him out as a future superstar.

Chile could not make it three trophies in as many years but it was not for the want of a herculean effort from Vidal. La Roja's driving force. He created more goalscoring opportunities on the road to the final than any other player (13) and in the dying moments in St Petersburg it was he and not Sanchez who looked the most likely to turn things around from open play.

Paris Saint-Germain winger Draxler revelled in both the captaincy and the attacking freedom granted to him by Low's glorious experiment. His performances in the opener against Australia and the final group win over Cameroon were simply dazzling. He grew into the final but needs a definitive performance against a major nation. Will have his eyes on a starting spot in 12 months' time.

Finding a dependable centre-forward has provided an unusual headache for Low after Miroslav Klose left the international stage but he might have found his man in Werner. The RB Leipzig star carried the form that brought 21 Bundesliga goals to Russia, finishing as the Golden Boot winner – two assists alongside three goals giving him the edge over Goretzka and Stindl despite only earning his first start in the third match

Who can argue with man-of-the-match awards in each of Portugal's group games? Well, lots of people, as it happens, given the fan votes to select the best player in each game turned into a popularity contest the Real Madrid superstar was always going to win. Nevertheless, with two goals and a sumptuous assist for Ricardo Quaresma in the opening draw against Mexico, Ronaldo produced more than his share of thrills for an adoring Russian public.