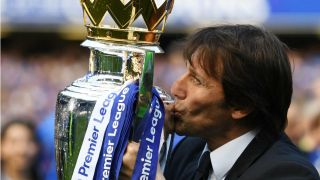 Antonio Conte says he is ready to reward the faith shown in him by Roman Abramovich by committing his long-term future to Premier League champions Chelsea.

Three of those games came in a sequence back in September when Chelsea followed a 2-2 draw at Swansea City with defeats against Liverpool and Arsenal – the latter 3-0 hammering prompting reports that Conte could be sacked just three months into a three-year deal.

However, the 13-game league winning streak which followed, masterminded by Conte's defensive revolution, was the bedrock of a title charge that has left the rest for dust.

And the former Serie A winner hailed the response of Abramovich, owner of a notoriously itchy trigger finger, during that mini-crisis of the autumn as the Blues now aim to complete a double against Arsenal in the FA Cup final on Saturday.

"He [Abramovich] came for three days to watch our training sessions, to watch the video analysis, to stay with us. He supported me," Conte told a pre-match news conference. "He never showed me he was angry.

"I think the club always saw my job, during pre-season and in that period, and trusted in my job. I never thought the club was thinking about sacking me. Honestly."

Links to Inter have persistently hung over Conte as Chelsea have marched to the title, but the manager gave one of the clearest indications yet that he sees his future long-term in London.

"At the moment, my situation is very clear. I have two more years' contract with the club," he said.

"Then, if the club give me the possibility to stay here and to extend my contract, for sure I am available to do this.

"But we have the same idea about the future. The way we have to do things together, to improve the squad and the team.

"But, I repeat, I'm happy for this season and am happy to stay here. I hope to stay here for many years."