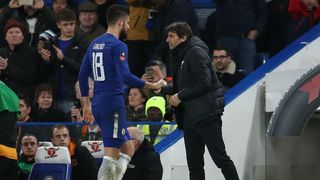 Chelsea's 4-0 win over Hull City in the FA Cup on Friday has given Antonio Conte selection headaches ahead of Barcelona's Champions League visit.

Conte's side produced an excellent display against the Championship strugglers at Stamford Bridge, Willian stealing the show thanks to a brilliant brace, as Olivier Giroud also impressed with his first goal for the club and a pair of assists.

Pedro got the other goal as Chelsea found themselves 4-0 up by half-time, despite the likes of Eden Hazard and N'Golo Kante being rested.

The comfortable scoreline gave Conte the chance to bring Giroud, Cesc Fabregas and Pedro off in the second half and now he has "doubts" over who to start against Barcelona after several eye-catching performances from his players.

"For sure it was a positive night for us because we had the opportunity to rest important players, key players for us," Conte told BT Sport.

"But at the same time I saw players in good form. To have a lot of doubts before the Barcelona game is important, because I have different options. Now we have three days to decide on them."

The 3-0 win over West Brom at the weekend saw Chelsea put consecutive defeats past them and Friday's victory will have further improved their morale.

But Conte has urged his players not to lose focus again, with games against Barcelona, Manchester United and Manchester City on the horizon.

"I think we lost two bad games, especially against Watford," Conte added. "But we played a good game at the end of a busy period.

"Now I think again we have confidence, but at the same time, the next two weeks we have to play massive games and we need to be strong.

"We need to face the games against Barca, United, City and Crystal Palace in the right way."