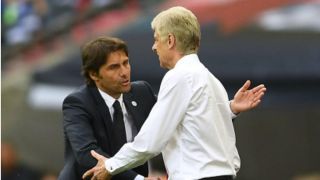 In a frantic opening at Wembley Stadium, Sanchez put Arsenal ahead in controversial fashion as, after his strike was initially ruled out by the linesman for an offside from Aaron Ramsey in the build-up, referee Taylor chose to overrule his assistant.

This decision seemed correct, as Ramsey did not appear to have interfered with play. However, Sanchez did seem to handle the ball when charging down N'Golo Kante's clearance.

And while Conte acknowledged that Chelsea's sluggish start ultimately proved costly - though he does not believe this is due to his side's celebrations following their Premier League triumph - the Italian was left frustrated by the decision to allow Sanchez's strike to stand.

"I think, our start for sure wasn't good enough. Arsenal started the game better than us," he said.

"Honestly I think the goal after three minutes, in this way, I think this goal [should have been] disallowed. There is a handball.

"For sure there is a clear hand ball. It's very clear and I don't understand why the referee didn't decide to whistle this situation.

"But it can happen. The players make a mistake, the referee makes a mistake. But at the end of the season I saw a lot of these mistakes against us.

"Handballs against Manchester United and Bournemouth and then they scored this was the same but we were unlucky.

"My players put all of themselves into the game. Our start wasn't good, the impact and the approach weren't good and Arsenal pushed a lot.

"Then we paid for this start."

6 - Alexis Sanchez has been directly involved in six goals in his last five appearances at Wembley (5 goals, 1 assist). Prized. 27 May 2017

Gilt-edged chances for Mesut Ozil, Danny Welbeck and Aaron Ramsey followed Sanchez's opener as Arsenal looked to move out of sight before the interval, but Chelsea held firm to gain a foothold in the game after the restart.

Despite Victor Moses' dismissal for simulation, Diego Costa's effort seemed destined to set up a grandstand finish, only for Ramsey's winner to stun Chelsea immediately from the kick-off.

Moses' sending off proved another key moment for Conte, but the former Juventus boss was mostly frustrated by his side's failure to maintain parity for a measly 38 seconds.

"In the second half we started very well and we created the chances to equalise. The second yellow card for Moses was for sure one of the two key moments," Conte added.

"I saw a contact with Moses and the defenders but I don't know if there is a contact for the penalty or not.

"Despite these situations we were able to equalise but then we conceded the second goal after 30 seconds. I think it was the key moment for our loss.

"It was very difficult. We created another chance with Diego and [David] Ospina made a fantastic save.

"To play with 10 men and you are able to equalise and then to concede - it was the key moment for our loss."