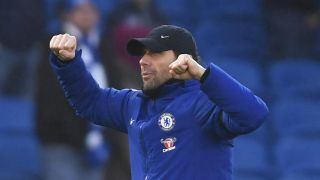 Antonio Conte has told Chelsea to defend him from speculation over his future at the club with a statement of support.

Despite Conte leading Chelsea to the Premier League title in his first season at Stamford Bridge, rumours about a possible departure have been continuous throughout his 18-month reign.

Conte has regularly spoken of his desire to return to Italy in the future, with the national team coach role vacant following Gian Piero Ventura's shock failure to lead the Azzurri to the World Cup, losing a play-off against Sweden.

But with a 3-0 home loss to Bournemouth on Wednesday intensifying speculation Conte could leave Chelsea, the 48-year-old said he wants more backing from the club.

"I must be honest, when there are these type of rumours or speculation after the first game of the season against Burnley [a 3-2 defeat]... Maybe I'd like the club to prepare a statement for me, no, to say they trust me in my work and my job," Conte said ahead of Monday's trip to Watford.

"So it's a big challenge to change the approach now. But, for sure, I'd be glad. You only have one person to speak [to make this happen].”

Chelsea owner Roman Abramovich is reportedly in London to check on the progress of the club, but Conte would not confirm whether he has held talks with the Russian.

Reports Conte is unhappy with the club's transfer strategy have been persistent, but the Italian accepts Chelsea cannot necessarily buy the best players any more, instead requiring a focus on developing young talent.

"You can see the other teams are working very hard, very strong to improve their squads," Conte added. "It's not simple, not simple. I think a club like Chelsea must have more patience than other teams.

"For sure it would be very difficult. If you compare it to the past, the situation has totally changed. Yes. But especially for this reason, you have to understand that only through a great work, a big work, can you go and try to be closer to these teams who maybe don't have this type of financial problems.

"In this case, the value of the coach is important. In the same way, with the players. To try to work together with the players and understand you need patience. We have a lot of young players. Our average age is very low now, don't forget. For sure, this is a part of the project."